skip to main | skip to sidebar

So Anita got married . . . back in February.  But here's the deal.  Anita is from Taiwan and her husband is from St. Louis, so what they did was get married at the courthouse in February, they had a traditional Taiwanese wedding over in Taiwan in March (the pictures are amazing and crazy), then they had a reception in St. Louis in April for their stateside friends.  So in the spirit of making her wedding festivities last as long as possible, I've taken until just now to finish their wedding quilt. 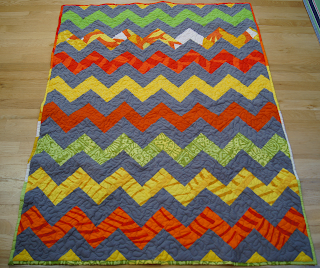 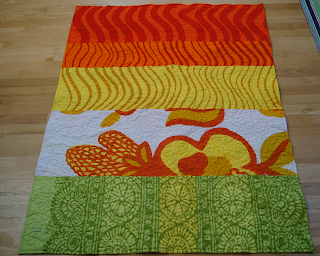 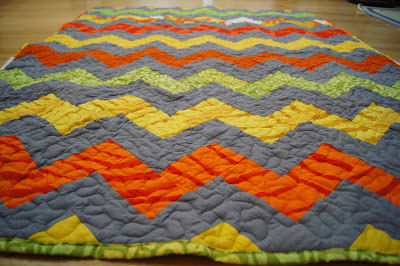 The quilt I chose to do was a chevron design.  I got the pattern from a website that popped up for me a number of times,  including on Jenny's blog; she made this quilt a few years ago for a friend.  I did something a little more modern, both color and pattern-wise because I felt that Anita and Trevor (who is a tattoo artist) might not be sooo into the flowery pastel-y fabrics I've used for past wedding quilts.  I hope I'm right!  The fabric, instead, is a few different Marimekko fabrics, which I scored on sale for like $3 a yard at Crate and Barrel Outlet.  I supplemented with some solid colors from JoAnn Fabrics.
The wedding reception, by the way was a great affair (on April 14).  It was held at the 3rd Degree Glass Factory in St. Louis, and all us guests got to ogle beautiful, one-of-a-kind glass pieces while we got all cocktailed up, and then I bought myself a vase, so there goes the money I saved by making them their wedding gift (although, I think most people will agree with me that making a quilt isn't necessarily cheaper, especially not if your time is precious!)
Anyway, the quilt's in the mail.  I hope Anita and Trevor will like it!
Posted by Wicky at 4:12 PM 1 comment:

Last night, I made dinner for my boyfriend.  Since most of the time we've been dating, I've been way too busy with school to cook anything more than macaroni and cheese, he seems to think this is a big deal or something.  It was really easy, however, and the easiest part was what I made for dessert: strawberry sauce (to put on vanilla ice cream).

This recipe is from a Sheila Lukins cookbook, which is one of my old standbys.
It calls for:
3 cups fresh ripe strawberries, rinsed, drained and cut up/quartered.
2 cups of sugar
2 teaspoons lemon zest
1 tablespoon lemon juice.

~Combine all ingredients in a 4 quart microwave safe dish mine was actually only 2 quarts and worked just fine
~Cook uncovered in the microwave on high power for 10 minutes.  this time was dependent on a microwave of 700 watts; my microwave is 1100 watts, so I decreased the time to 6 minutes
~Remove and stir, then put back in the microwave for 5 more minutes I put it in for 4 minutes
~Cool completely before pouring into containers and storing in the refrigerator.  Can be kept, refrigerated for up to one month.


This is great for a cool, summer sundae, although we added hot fudge.

The dinner I cooked to lead up to this dish was cornbread (also a recipe from Sheila Lukins), broccoli, and Barbecue Apricot Pork Chops.  This is one of my favorite recipes from Real Simple a number of years ago.  It is originally for chicken, but I've tried it with a few different meats, just be mindful of how the cooking time may change.

Email ThisBlogThis!Share to TwitterShare to FacebookShare to Pinterest
Labels: recipes

The Marriage Plot by Jeffrey Eugenides
My rating: 4 of 5 stars

It took me about 4 months to read this book; it bookended my second semester of grad school. But whenever I managed to pick it up, however many weeks were in between readings, I knew just where I had left off. Each of the 3 main characters are very real because you can see both their good and bad qualities and the writing is also very real, including a disturbingly realistic view into the life of a manic depressive. It's a great account reminding us how we cannot choose who we fall in love with, but we can decide how to act on that love, for better or for worse.

View all my reviews
Posted by Wicky at 6:51 PM No comments:

Either last year or the fall before, Martha Stewart had a project in her Good Things section that was a sewn scarf.  I tore out the page, put it up on my wall, and have looked at it ever since as a wish-list project.  Being in school, I didn't think I would have time to make some handmade gifts for Christmas this year, but I found some time after the semester was over.
Here are Martha's instructions for the project.  As you will see, I took some liberties.  It was a quick project: fabric on one side and fleece on the other.  My mom said that hers was even a little too warm, but I think she will be able to stand it, since she keeps her house at a balmy 60 degrees or so.
I made six scarves total - two with each fabric (see the post below for the three fabrics I used).

Falling off the Fabric Wagon

It's that time of year again, when I'm either busy making Christmas gifts, baked goods, etc., or feeling guilty about NOT doing those things.  So today I made a trip to The Needle Shop with my friend Brittany, where I fell off the hoarder wagon once again.  Here's what I bought: 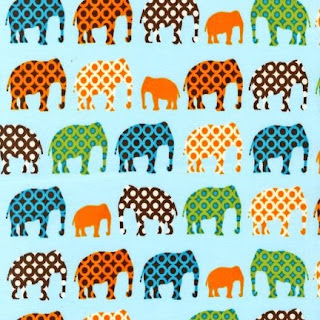 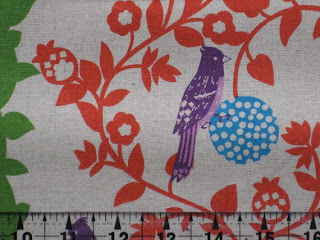 and Camera (Cyan) by Echino 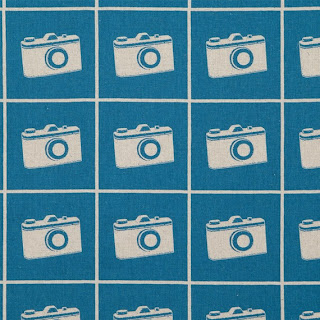 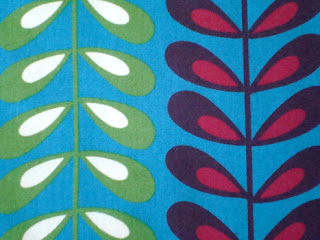 and Outside Oslo, Skiff by Jessica Jones 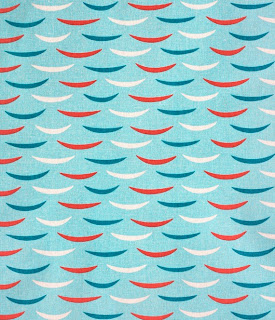 Hopefully I can stay motivated for enough more time to actually do something with them.  Anyway, glad to be on vacation and have some time for projects again!
Posted by Wicky at 3:20 PM No comments:

Email ThisBlogThis!Share to TwitterShare to FacebookShare to Pinterest
Labels: Brittany

I've been busy busy with school these days, but I've fit in a little bit of fun here and there.  I just haven't had enough time to blog about it . . .
Anyway, this is a belated post about Jenny's birthday happenings.
Usually, it's a bit of a bummer when someone makes their own birthday cake, but Jenny's case was an exception.  She told me the week before her birthday that her current architecture project was going to take the form of a cake - a wedding cake - which would be due on her actual birthday.  She first asked for my help just transporting the cake to school, but I insinuated myself a little more and ended up getting to help with the decorating as well.  The cake was modeled after St. Bride's church in London, which supposedly inspired the wedding cake tradition.

Jenny baked for days in advance, and made cake layers of all different flavors.  I stepped in for the final fondant rolling and frosting piping, and we had a great afternoon of it, followed by a very slow and smooth drive to school.
Of course, the cake didn't turn out quite as great as either of us had pictured in our minds, but still it turned out pretty good, considering it was a first try at anything wedding-cake-ish. 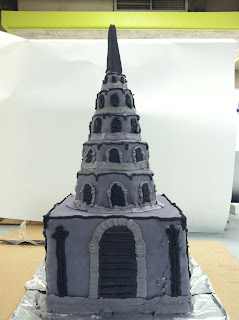 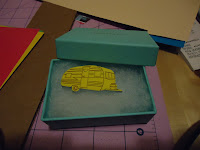 On her actual birthday, I gave Jenny a pin that I had bought for her the weekend before, at the Renegade Craft Fair.  I had a little too much fun wrapping it up in an old Tiffany's box, which I spiced up with some red ribbon (my signature color scheme!). 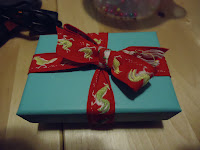 And since we wanted her classmates to be able to have some cake (but not break into the big one), I used the extra leftover cut-off bits to make some cake balls.  Like the cake, they didn't turn out quite as pretty as I had imagined, partially because Jenny was borrowing my frosting tips.  They tasted yummy, anyway. 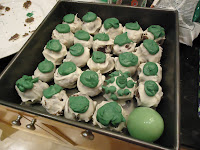 If I haven't written anything new for you here, check out my other blog!

What I've Been Reading

Other sites I've come across